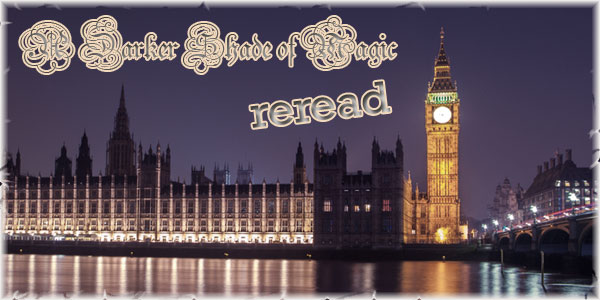 Welcome to my re-read of A Darker Shade of Magic by V.E. Schwab. This is the third part of my weekly re-read posts. If you have read ADSOM, come re-read and discuss it with me. If you never read it, I highly recommend it especially if you like fantasy books, sarcastic protagonists, kick-ass heroine, and fabulous coat. Even though it’s a re-read, I will do my best to avoid spoiling future chapters in the post itself, which is quite easy because most of the time, I didn’t remember what happened. So even though this is the first time you read ADSOM, you could follow along. However, please note that although the post itself is spoiler-free from future chapters, the comments section are spoiler zone, where you can talk about anything including the plot twist and the book conclusion. Without further ado, let’s sail through A Darker Shade of Magic. All aboard!

This week I covered Part III Grey Thief, which consists of three sub-parts (I refer to them as Chapters).

We first saw her in London, Grey London to be clear, fresh from pickpocketing a man for a silver pocket watch. Lila is a thrill-seeker, something that gets to Barron (the owner of The Stone’s Throne) everytime. We also learned that Lila is a wanted fugitive for stealing from rich people in London. Then, she made her way back to her ship—well, not a ship that she owned but a ship she renting in—The Sea King and was preparing to rest when the ship owner, Powell, stumbled into her room drunk and asked for his share. When refused, Powell tried to rape her and Lila stabbed him in the chest. She proceeded to burn the ship (and the corpse within) and escaped carrying her weapons and her favorite knife. Lila went to The Stone’s Throw despite having a heated argument with Barron, the owner, a year before after she stole from his customer. Barron gave her a room and welcomed her back.

Hello, I really don’t know what to say besides gushing on how amazing Lila Bard is. She is a 19-years old thief with an unknown past, but unlike Kell who doesn’t even know who he is, Lila seems to be the kind of person who knew herself VERY well (she’s just not telling us… yet). I like how Schwab make her protagonists the opposite of each other in this case. Kell is older but doesn’t know who he is or what he’s going to do (besides collecting trinket). Lila is younger, but she knew exactly what she wants and she’s not afraid to do everything to get it. The similarity between these two are they both felt that they didn’t belong and that they dream of freedom.

Right, enough about Kell. Back to Lila Bard.

She seeks danger or, in her words, danger seeks us so it’s better to find it first. This girl is very much alive. I don’t necessarily agree that thieving makes you feel alive (books and coffee make me appreciate life more I think), but Lila obviously feel alive the closer she is to danger. She also wanted to be a pirate, mostly because she wanted to be free and could travel wherever she wanted to go (EVERYWHERE). I like this girl because she doesn’t let the world shatter her dream. It’s not to say that she’s perfect because she clearly have issue with her methods of getting her dream, but she’s a stubborn enough to suffer and survive.

I also like her relationship with Barron. We were told that she and Barron had a huge argument that led her to tell him to shove his tavern and its rooms up his — yeah. But he clearly care for her that he let her just move back in. Lila herself, however, doesn’t need Barron’s approval to do what she wants. She is a free soul, but in a way she is not at all free because her circumstances barred her from what she really wants to do. It’ll be fun to see how Lila and Kell interacts when (if) they meet.

Got to be when Lila went back to The Stone’s Throw and asked Barron for a room. These two have great relationship.

That’s all for today. Part III is a short one, but next week I’ll be back with Part IV White Throne which is quite a long part. See ya.